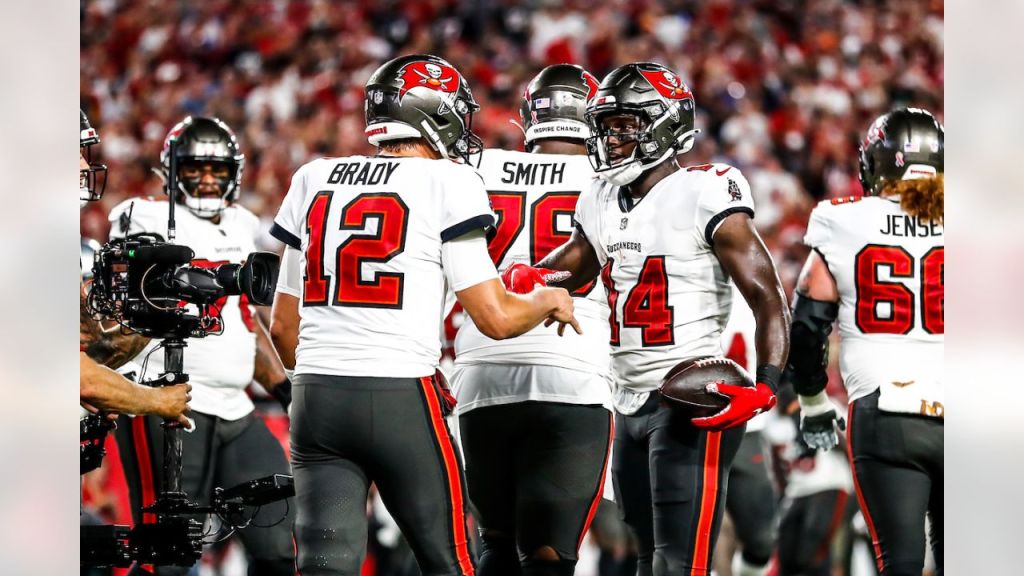 The UNDEFEATED Tampa Bay Buccaneers have ripped victory from the jaws of defeat on the NFL’s opening night. Captain Brady and his shoulder-padded krewe once again slipped the surly grasp of defeat with no time to spare. For those who fare the choppy seas, plunder be the prize. For those who slip or stumble, the plank awaits.

In my Must Watch Matchups pregame post, I noted how excited I was to watch the Cooper and Lamb match up against Carlton and Murphy-Bunting. Bad news first: Murphy-Bunting injured his arm on a friendly fire hit in the first half. On the plus side, Carlton Davis was shutting down whichever side of the field he roamed.

Davis logged three passes defended and one interception tonight. The 2018 second-round product out of Auburn is one of a long list of players due for contracts next year. With Murphy-Bunting likely out several weeks (or longer, I’m not a doctor) Carlton may prove to be indispensable on the boundary.

On back-to-back drives in the first half, egregious turnovers handed the Cowboys excellent field position. A Peanut Punch from Demarcus Lawrence knocked the ball from Rojo’s hands. Before the coaches could finish telling Rojo to go to the doghouse, Fournette flubbed a perfectly delivered screen-pass with room to run. This sequence kept the game within reach for the Cowboys when it should have been put away.

Each back only managed between 3.5 and 3.6 yards per carry respectively, and neither had more than 32 yards individually running or receiving. While Fournette did end up securing several critical flat release catches down the stretch, neither player was able to make up for their first half mishaps this week.

As foot-to-ball legend Pat McAfee would say, Bradley Pinion showed out for the brand tonight. The third-year Buccaneer pinned three different punts within six yards of the endzone. His first punt, which happened to be the first punt of the season, traveled from his own 22-yard line to the Cowboys’ 2-yard line. If Bradley Pinion had just an average night, the Bucs would have lost the field position battle thanks to back-to-back RB turnovers.

Chris Godwin had a very Jameis Winston night at WR against the Cowboys. The promising wideout out of Penn State alternated between putting up and shutting up all night.

Godwin logged the first TD of the NFL season with a motioned slant route, and he made it look easy. Then, he logged a critical drop inside the 5-yard line after beating the Cowboys over the top. With five minutes left to play and only up two points, Godwin coughed up the ball in the redzone and gave the Cowboys chace to take back the lead. Fortunately, with less than 30 seconds left in regulation, Brady goes to, of all people, Godwin with a back shoulder pass to lead the Bucs into scoring range and out of bounds. Brady’s faith was rewarded, Godwin secured the catch and stepped out of bounds comfortably in field goal range.

All is well that ends well in Tampa tonight, but I don’t think Jason Licht will be texting Godwin’s agent about finishing up that rumored contract extension postgame.

Tampa, we have a kicker. After years of toying with Matt Gay and He-Who-Shall-Not-Be-Named, the much maligned position of the Tampa Bay packekicker has finally be solved. Succop, just as he did at every junction last season, delivered the goods tonight. After nailing every extra point in a game that ended up needing them, Succop drilled a 36-yard attempt with six seconds left on the clock. The moment was not too big for the former Mr. Irrelevant, and his heroics in the clutch secured the 2021 Buccaneers their first victory.

CB Depth – Allowed both DAL starting WRs over 100 yards each