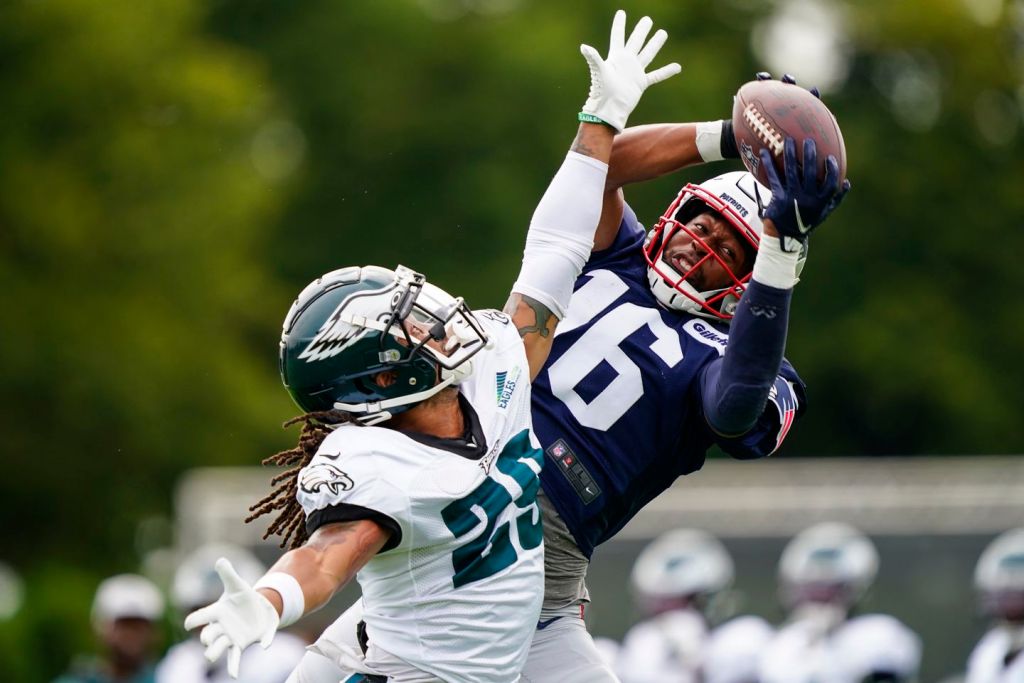 The Pats have been down in Philadelphia practicing with the Eagles all week. Quarterback Cam Newton has looked electric during the joint practices and the team looks solid. On the other hand, the Patriots have just one healthy tight end going into tomorrow night’s matchup with the Eagles. It’s going to be another interesting matchup to see who the Patriots decide gets more snaps than others, and just how they handle the current situation at tight end with Jonnu Smith, Hunter Henry, and Matt LaCosse all hurt.

There are quite a lot of things to look out for in Lincoln Financial Field tomorrow night, but I’ll try to narrow it down to three. Kick it off, Bailey. Let’s get this one underway.

#1: How are the reps split at Quarterback?

Last week we only saw Newton get two drives in the first quarter against Washington. The rookie Mac Jones got five drives and was impressive for the most part. Meanwhile, the veteran Brian Hoyer got to end the game by throwing just four passes. It is imperative to me that we get to see more of Newton in these final two games. In Gillette Stadium last week, he only got to throw it seven times and the highlights of his drives were getting strip-sacked and a big play taken away by a holding penalty. I loved watching Jones as much as everybody else did. But we can’t just throw Cam Newton out to the curb after one pre-season game. Let’s see more of what the former MVP has to give.

#2: Are there any switches at Cornerback?

Last week we saw Jalen Mills get torched by Terry McLaurin in his Patriots pre-season debut. The Pats cannot afford to be this lost at their cornerback depth. They have to figure something out because as it stands currently, Stephon Gilmore won’t be back by week one. Whether it be because of injury or his lack of a new deal. I’m definitely going to keep an eye on who’s covering the Heisman Trophy winner Devonta Smith. Two of the corner positions are set in J.C. Jackson and Jonathan Jones, who will be the next man up?

As we mentioned before, the only healthy tight end heading into tomorrow’s exhibition is the second-year 3rd rounder Devin Asiasi. He has one career touchdown catch and most of his receptions came in week 17 against the Jets last year. I’m very curious as to how the Pats use him. Will they use fewer tight end sets or will they see this as an opportunity to see what the UCLA product has to offer? I personally hope it’s the latter. If Henry or Smith have to take an extended leave of absence due to injury, somebody has to step up. I would absolutely love it if Asiasi is the one to step up to the challenge.

Listen, Bill Belichick put it best: “…obviously he needs to work in every area because he hasn’t done much”. Chase Winovich is just now returning from the PUP list and has missed a significant portion of training camp. I can’t say if he’ll get a whole lot of snaps, but I hope the Pats use pre-season to throw him into the fire and see what he’s got to focus on. Year three is big for any player on their rookie deal. Winovich exploded in his own way in 2020. 2021 will be huge to determine his long-term future in New England if there is to be a future in Foxboro. The Michigan man is going to have to fight like hell to get some starting reps in the regular season. The pre-season is your best bet to beat out guys like Josh Uche, Matt Judon, Henry Anderson, Tashawn Bower, and Deatrich Wise.

With there only being three pre-season games, it’s difficult to predict how many reps starters will get. We always knew the starters would get at least a half in the third game and nothing in the last game in previous seasons. Now does that dress rehearsal get pushed up to week two? Or does it stay week three and that’s how the pre-season ends? It’ll be interesting to see how teams handle this dilemma.

My energy remains the same anytime the Eagles get on the schedule. I don’t care if it’s pre-season or the Super Bowl. I’m hoping for a 52-0 blowout. Super Bowl LII and just how rambunctious their fans get always leaves a bad taste in my mouth. It may be hypocritical, but don’t pretend like the rest of the NFL’s fanbase feels the same way. I knew people who hated the Patriots in 2017 who wanted the Pats to win that game. But overall, here’s to hoping that we see great play out of our own guys, and anything bad by the Eagles would just be a cherry on top!