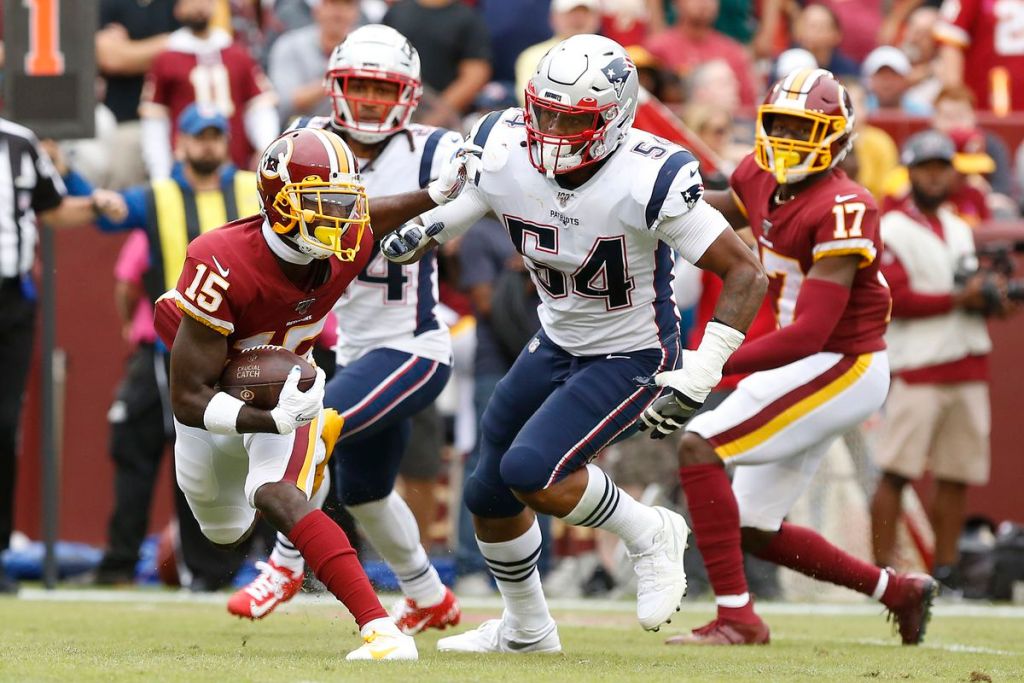 Football is back in Gillette Stadium folks! After a long year of sadness and disappointment for Pats fans, we can come together once again. Even if it is just pre-season. I’ve been following the Patriots through these previews for the better part of two seasons. You can find my previous work on Brooklyn Beat, as I covered the disappointment of Tom Brady‘s final year in 2019 through the 7-9 disaster of 2020.

We’ve all been waiting impatiently for this moment to arrive, but we’ve made it my friends. Kick it off, Bailey! Let’s get the 2021 pre-season underway against quarterback Cam Newton‘s former coach in riverboat Ron Rivera and the Washington Football Team!

Rookie quarterback Mac Jones was taken with the 15th overall pick in the 2021 NFL Draft and has some big shoes to fill in the upcoming years. Winning over Patriots fans isn’t an easy task after 20 years of the GOAT at the helm. We see how Newton is treated in the Boston media all the time. You’d think he was Jamarcus Russell and not a former MVP by the way that he’s discussed in New England.

Though we are unlikely to see Newton or Jones get too many snaps, I would hope McCorkle gets a chance to prove himself a little bit in this matchup. This is the first time he gets to let loose against NFL competition. Where the game actually matters to some extent. It’s a jump from training camp certainly, and fans don’t quite appreciate the value of pre-season. I wonder how much Jones and Newton will play or if it’ll just be the Brian Hoyer show to open up the pre-season. But I can’t imagine that the Pats go all four quarters without Jones or Newton.

#2: Any standouts at wide reciever?

The performance by the receiving core in 2020 was putrid. Jakobi Meyers, an undrafted free agent, was by far the best receiver on this squad last year. As good as it is for Meyers, it’s a damning statement on 2019 first-round pick N’Keal Harry and Bill Belichick. Sure, Newton wasn’t exactly good at passing the football last year, but his receivers did next to nothing to help. In response, Belichick invested greatly in the core. Adding Nelson Agholor, Kendrick Bourne, Tre Nixon, and Marvin Hall give some great competition to Harry and others within the Pats depth chart.

I’m sure we all have heard by now that Harry requested a trade a few short weeks ago. It seems as though his frustration has simmered and he’s become a star at training camp. Along with Kristian Wilkerson, an undrafted free agent who has also made some buzz in camp. I’m not expecting anybody to light it up just one week into the preseason like Austin Carr in 2017. But just a nice play or two will go a long way into figuring out what exactly this position on the roster is capable of.

#3: Could anybody help fill the shoes of Stephon Gilmore?

Cornerback Stephon Gilmore suffered a torn quad late last season, and will more than likely miss some time in the regular season. Especially as he sits out awaiting a new contract/pay raise. So who shows up to complement J.C. Jackson and Jonathan Jones?

We’ve been seeing swiss-army knife Jalen Mills get snaps at corner, and the Patriots have plenty of depth with JoeJuan Williams, Michael Jackson Sr, Dee Virgin, Myles Bryant, and De’Angelo Ross. But the depth needs to turn into answers quickly. The secondary struggled greatly last year when Gilmore was out. Stefon Diggs torched us twice against J.C. Jackson. If the Pats don’t find an answer in the secondary and Gilmore remains sidelined? They could be in deep trouble come week one against Jaylen Waddle and Devante Parker.

2020 third-round pick Josh Uche never really got a chance to boom or bust in his rookie season. The Michigan edge rusher played in just nine games and got one sack with seven quarterback hits last season. Starting off the season on the injury report and never hitting the field. I think he will benefit greatly from a pre-season to develop his game.

He comes into his second season buried on the depth chart. The returns of Dont’a Hightower, Kyle Van Noy, and the signing of Matt Judon don’t exactly hand Uche a starting job. But with the way Belichick uses his edge rushers, he could very well be a very good situational player. He is seriously underrated in coverage and could serve to be a multi-use player nobody really saw coming. Keep your eyes on Uche not only in this matchup but throughout pre-season entirely.

The Pats are finally back in front of fans. It’s great to say that once again. After attending the in-stadium practice on Tuesday, it proved to me that Pats nation is still running strong. It also gave me some great reassurance that fans will rally behind Cam Newton should he be the starter.

I know the preseason isn’t at all flashy. We probably won’t see a lot of the fan favorites or regular team leaders. But it’s more valuable than ever while the Patriots are in an awkward transition period. I’ll be in attendance tomorrow night and I’m not looking for a win or a surprise superstar player. Just give us something to be excited about heading into the regular season. All eyes are on you, New England.