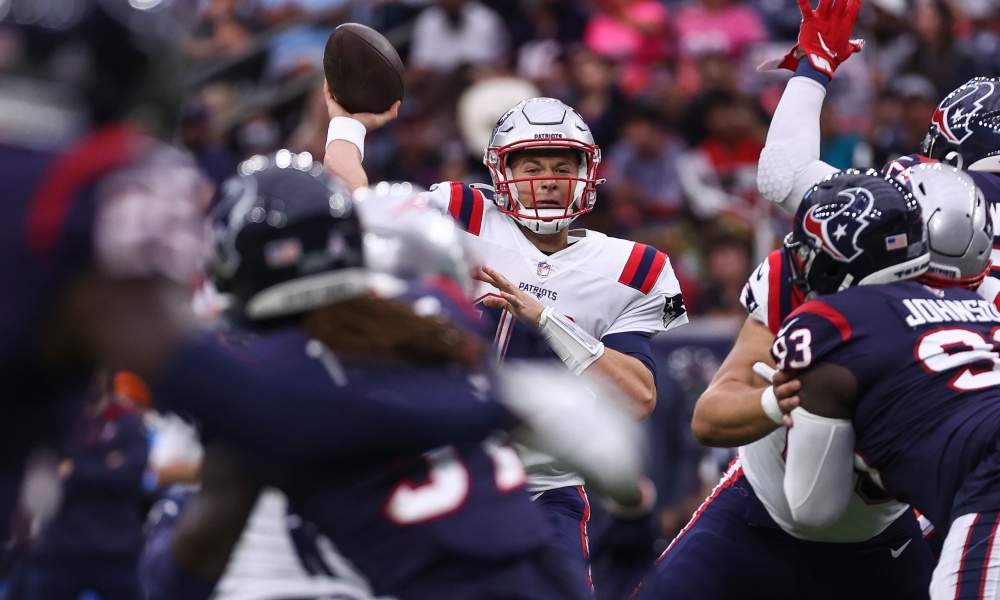 Patriots Regress in Win Versus Texans

Watching the Patriots on Sunday afternoon in Houston, it’d be easy to forget that this is the same squadron that took on Tom Brady and the Buccaneers and almost won. In a narrow 25-22 victory against the Texans, the Pats looked uninspired. Early on in the game, rookie quarterback Davis Mills was able to walk all over the Patriots D. He had a surprisingly impressive performance, tossing for 312 yards and 3 TDs. Give him credit, he played well. The best a rookie ever has versus Bill Belichick. But I blame the Patriots defense for being so weak more than I think Mills did anything amazing. The Steve Belichick/Jerod Mayo unit just looked lost through the entirety of the first three quarters. After getting an 18-play, 10-minute long touchdown drive dropped on them in the first quarter, they simply rolled over.

Offensively, their ailments weren’t exactly what you’d expect out of a team down 4 of their starting 5 offensive linemen. Rookie quarterback Mac Jones was only sacked once. The things that costed them were ghosts that have haunted them all season; ball security. This game all went sideways for the Patriots when running back Damien Harris, whose health and job security are now in jeopardy, fumbled a touchdown in the endzone to allow the Texans to start to pull away ahead of halftime. And following a brutal Jakobi Meyers drop that cost the Patriots a score, instead of going into halftime tied at 15, they were down 15-9 following a Nick Folk field goal. Then opened the third quarter down 22-9.

Why It’s So Troubling

This is a Houston Texans team headed by players who probably wouldn’t make it as an everyday starter on other teams in the league. Some of whom are familiar to the fans of New England. A Texans team that is without their superstar quarterback Deshaun Watson, and their serviceable backup Tyrod Taylor. Yet they still almost let a third-round pick steal the game away. While on the opposite side, their first-round pick struggled to get anything noteworthy going.

It’s been a bit slow out of the gate for Mac Jones. The coaching staff hasn’t quite given him the opportunity to shine as fans had hoped. His biggest highlight so far is completing 19 consecutive throws against Tampa. Most of which, were easy check-downs and just making simple reads. Which have their worth, but the lack of explosiveness is a deep concern. A concern that lies at the feet of Josh McDaniels and his play calling.

Defensively it’s almost double the concern. If Davis Mills is able to walk all over New England with a sub-average level of talent around him, just imagine what the Dallas Cowboys will be capable of. With Dak Prescott, Ezekiel Elliott, Amari Cooper, CeeDee Lamb, and a solid offensive line? Let’s just say they should hope for a gigantic return to their week four form next weekend.

It doesn’t get much easier for the Patriots moving forward. Following the Cowboys, the Patriots get the Jets at home, the Panthers in Carolina for a Stephon Gilmore revenge game, the Chargers in Los Angeles, and then the Browns in Gillette. You have to wonder at 2-3 if the Patriots can run the gauntlet necessary to get into the playoffs. If this were a Tom Brady team? I wouldn’t be hitting the panic button just yet. But it’s not. And that red button looks really tempting right about now. Let’s see how this team handles themselves fully healthy before we panic though. There’s still plenty of football left to go.