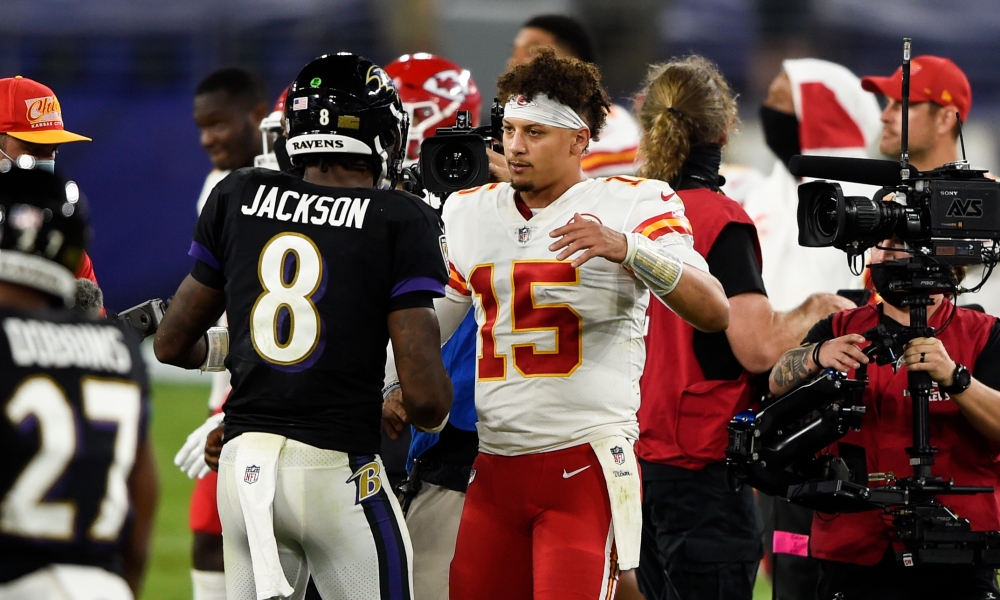 In this article, I will rank every quarterback in the NFL within two qualifiers: they must start on an NFL team in 2021 and have played 150 snaps in their career. I am adding Deshaun Watson as an exception.

Patrick Mahomes sits atop this list, to the surprise of absolutely nobody. The fifth-year superstar out of Texas Tech instantly stepped into elite status as soon as he became an NFL starter. He has amassed a Super Bowl ring, an NFL MVP, and Super Bowl MVP in that time while being incredible both by the eye test and analytically. Mahomes possesses a league-leading 0.305 EPA/play along with a 0.175 EPA+CPOE composite since 2019. He is the best in the business.

I am not going to take into account or delve into the allegations against Deshaun Watson. In terms of his ability and production, he is as elite as they come. Watson since 2019 has a steller EPA+CPOE composite and EPA/play combination of 0.148 and 0.213. Watson is very obviously an elite talent and has carried this Houston team since he was drafted in 2017.

Tom Brady has been nothing short of brilliant analytically for most of his career and since leaving Foxboro he has only improved. His analytical output has starkly increased since arriving in West Florida and the eye test tells you the same. He is an elite NFL quarterback.

Russell Wilson is the logical next guy up on this list. Since 2019, his EPA+CPOE composite ranks fifth in the NFL. Wilson has been consistently great his entire career in Seattle and shows no signs of slowing down.

Lamar Jackson deserves more credit for what he has accomplished and his skillset. Jackson has posted a fourth-best 0.248 EPA/play since 2019 coupled with a fourth-best 0.152 EPA+CPOE. Both numbers are downright elite and fly in the face of the idea he is a bad passer. Jackson has made great strides to be a far more than a formidable passer and is the most dangerous quantity in the league on the ground.

Josh Allen slots in seventh on this list. In 2020, Allen posted a third-best 0.173 EPA+CPOE composite and a fifth-best 0.256 EPA/play. Allen has backed that up with a sixth and seventh-best showing in 2021, respectively.

Murray is perhaps the most dynamic player not named Lamar Jackson in the league. Anyone who watches the Oklahoma product play knows his ability to escape and create. Murray has also made huge strides analytically. In 2021, his EPA+CPOE composite has rocketed to a second-best 0.197.

Matthew Stafford after being freed from Detroit has been downright phenomenal. His analytics already exceeded what a quarterback playing in Detroit should output. In Los Angeles, Stafford has posted a league-best EPA/play of 0.388 and a league-best EPA+CPOE composite of 0.2o0. His CPOE numbers have been somewhat underwhelming, and his composite is buoyed by the EPA/play. I would like to see more, but Stafford has placed the Rams in a great position to challenge for the Lombardi Trophy.

Justin Herbert is on a lightspeed ascent on this list. I expect him to exceed this ranking very soon. In 2021, Herbert had posted a fifth-best EPA/play of 0.269 along with a ninth-best EPA+CPOE composite of 0.158 prior to the Chargers’ drubbing at the hands of the Baltimore Ravens. His rookie season in 2020 was solid for a rookie and he is looking like a potential top-five quarterback.

I could see Prescott being even higher than this based on dynamism and eye test alone. He is analytically extremely solid posting an eleventh-best EPA+CPOE composite and seventh-best EPA/play since 2019. Prescott is as solid as they come and I could see being higher on this list I just don’t see it right now, however, the gap from Prescott to the next guy down is tangible.

Kirk Cousins is surely the most overhated quarterback in the league. Cousins is an extremely efficient passer and the analytics bear that out. Since 2019, Cousins is eighth in EPA+CPOE composite (0.145) and tenth in EPA/play (0.208). Cousins is not flashy nor is going to make your head spin but he is extremely good.

Burrow is a rapidly emerging talent and could very well move up this list going forward. In 2021, since recovering from the gruesome leg injury he suffered in his rookie season he is roughly the 9th-best analytical quarterback. I need more of a sample size but he looks the part.

To be clear, the next three to four quarterbacks are extremely hard to dissect and separate. Everyone understands that Tannehill is a good quarterback, but analytically he has been unbelievable. Since 2019, Tannehill has posted a 0.173 EPA+CPOE composite and a 0.287 EPA/play, which both rank second in the league. According to the analytics, Tannehill should be much higher on this list but I am factoring in the eye test and dynamism along with a dip in analytical prowess in 2021.

With the wealth of talent in the NFL, it is kind of tough to see Mayfield advancing too much higher than ~10th on this list in the future. Mayfield is rock solid and has improved analytically over time but he just lacks the dynamism.

Carr sort of gets the short end of the stick in these rankings. He has been solid but that is not enough to overcome the analytically superior Tannehill and Cousins and is not dynamic enough to beat out Mayfield or Burrow.

Matt Ryan is not analytically very good but anyone with eyes knows he is a very good quarterback. Once we move past the top 16, the former MVP is just clearly the best guy left.

Jameis Winston’s arm talent is undeniable and is up there with the best. However, his decision-making has plagued his career and while New Orleans looks to have eliminated some of that it is still a huge detraction on him.

Jones has improved rapidly as time has gone on. In 2021, Jones is a mid-pack analytical quarterback despite being putrid in his early days. The thing that separates him from those below him though is his running ability that teams really are starting to have to account for.

Teddy Bridgewater is as efficient and solid as you’ll get in this neck of the list. Bridgewater has been analytically brilliant since joining the Denver Broncos, but his lack of dynamism and arm talent hurts his stock.

Wentz has had a rollercoaster of a career. Prior to tearing his ACL, he was the front-runner for MVP in 2017. Afterward, he has struggled mightily. Since joining Indianapolis, Wentz has rebounded moderately but this is likely where he will reside in the league ranks from here on.

Tua has improved sharply since his rookie season in 2020. The Dolphins seem to trust their investment. Although I do see the potential for Tagovailoa to ascend, his arm is not very explosive.

Tyrod Taylor is a solid option at the quarterback position. The Virginia Tech product is extremely efficient and has checked out analytically most of his career, especially in 2021. His lack of arm talent and x-factor limits his upside but he is very solid.

Ryan Fitzpatrick, much like Tyrod Taylor is a journeyman who provides stability. He will not wow you, but Fitzmagic has a winning pedigree and knows how to manage a game and offense.

Jimmy Garoppolo is perhaps the quarterback most holding his offense back in the NFL. He is efficient but his inability to push the ball down the field has caused a Kyle Shanahan offense loaded with playmakers like Deebo Samuel and George Kittle to suffer. His analytical footprint has also suffered in 2021 with George Kittle chronically injured and a defense that is keeping him on the field more than usual. The 49ers spent the third-overall pick in 2021 on Trey Lance, and he will replace Garoppolo soon.

Much like Jimmy Garoppolo, Mac Jones is very limited in pushing the ball downfield. Jones, however, is weaponless and has room for growth. The Alabama product is only below because of his rookie status.

Jalen Hurts is by most metrics a horrifically inefficient passer. Hurts does have the upside of being an elite runner, but unless he improves his passing acumen he will remain in the cellar.

Jared Goff was a mid quarterback under Sean McVay and is bad in Detroit. He is a placeholder for the Lions until they find their guy in the draft.

One would have thought that Darnold would’ve improved after leaving the perils of the New York Jets, however, he really hasn’t. Darnold is still a hindrance under center and there’s a reason the Carolina Panthers are reportedly in the Deshaun Watson sweepstakes.

If Pittsburgh had anyone to replace him, he would’ve already been sent to the retirement home.

Here starts the trio of rookie quarterbacks in horrible situations. Lawrence however has made the most out of his of the three and has shown signs of progression recently.

Fields is receiving zero favors from the offense and team around him. However, he is also been poor in his own right. He is being sacked at an alarming rate relative to his offensive line quality and has struggled at pro pace.

Wilson is the worst of the aforementioned trio so far. His situation is atrocious, but his decision-making has been putrid, and has not looked good save a bright spot against the Tennessee Titans.