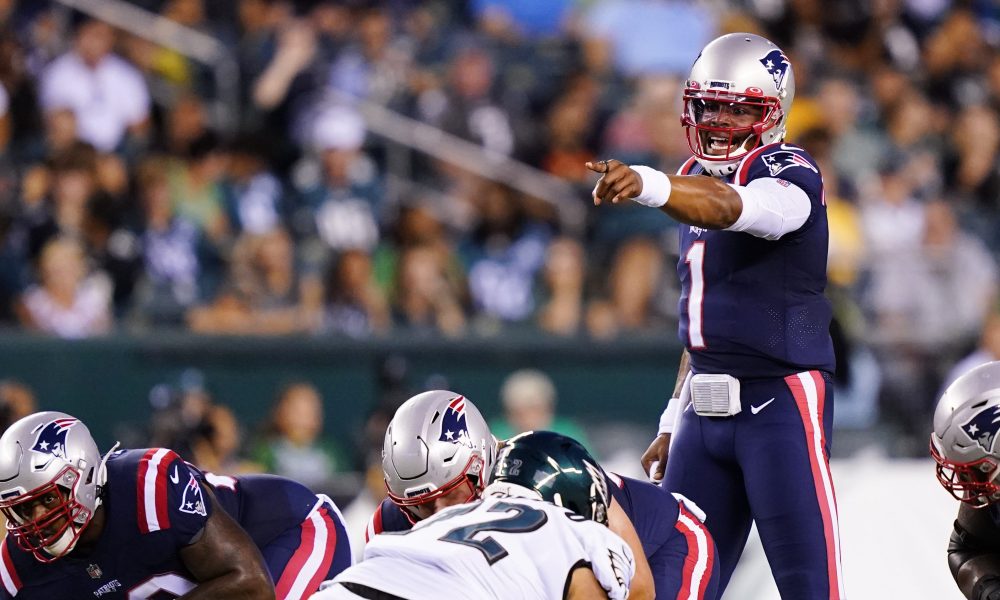 Evaluating Patriots’ 35-0 Win Over the Eagles

I wrote in my preview of this game on Wednesday that I hoped the Patriots would blow out the Eagles. They did just that, but I’ve taken for granted just how great close preseason games are for evaluation. The Eagles’ offense simply rolled over and died Thursday night, and their defense didn’t give the Patriots much resistance. Nevertheless, I’ve found five focuses of interest to discuss, and I hope next week we can see a more competitive match-up to really finalize the final pieces of the roster.

The Patriots starting quarterback job is still Cam Newton’s to lose, and on Thursday night he did nothing to hurt his standings. After having an abysmal outing against Washington last week, SuperCam stepped up to the plate and posted an impressive 103 yards on nine throws and a touchdown pass. He really looked like the quarterback we all thought we were getting in 2020. Making good reads, protecting the football, calmy navigating the pocket when the pressure came in. Sure, it was against a horrendous Eagles defense without some of their most key starters. But let’s take the positives where we can get them. QB1 looked excellent and has at least temporarily restored confidence in Patriots fans everywhere. Not bad for the “Checkdown King”.

Of course, if we discuss one quarterback, we must discuss the other. First-round pick Mac Jones continued his impressive pre-season against Philadelphia going 13-19 again for 146 yards. He had another beautiful deep ball down the sidelines that should have been caught. Unfortunately, N’Keal Harry had butterfingers and screwed up his shoulder/arm in the process. McCorkle has not made this an easy win for Newton in the quarterback competition. As he should be doing. I think Newton will probably be the starter in the season opener, but Jones is right on his tail ready for his moment.

#3: Patriots Have a Dilemma at Runningback

Ice cream is fantastic every once in a while, but you can always have too much of a good thing. This is the Patriots’ situation at running back. There are five really solid backs on this depth chart as is. Damien Harris, James White, Sony Michel, Brandon Bolden, J.J. Taylor, and Rhamondre Stevenson make up this elite backfield. But the Patriots can’t keep every single one. There’s going to have to be an odd-man-out after next week. I would think that Harris’ and White’s jobs are safe, and Bolden’s expertise in special teams keeps him here. In all likelihood, the Patriots are going to be able to keep maybe two more. This is going to be a tough decision for Bill Belichick. One that I do not envy. Especially after Michel, Stevenson and Taylor all played extremely well Thursday night in Philly.

What I would do? I’d look to trade Sony Michel. He’s in a contract year and I don’t think the Patriots are looking to sign him long-term anyways. Then you can either try to get away with putting Taylor on the practice squad or give Stevenson the good ol’ “Foxboro Flu” where they get redshirted their rookie season. It’ll be interesting to see what Belichick does at this position.

Edge rusher Matt Judon has been a bull in a china shop for the Patriots so far in pre-season. Right off the bat against the Eagles, he made his presence felt with a strip-sack off of former Super Bowl MVP Joe Flacco. Sure it was a bad snap, but we can’t knock the hustle. He was just as lethal against the Football Team last week consistently getting into the backfield and making good tackles. So far he’s proven to be the best investment from the 2021 free agency class. Tight ends Hunter Henry and Jonnu Smith haven’t exactly gotten the chance to shine this pre-season, but Judon has and he’s made the most of it. Chase Winovich, Josh Uche, and Ronnie Perkins are going to have a difficult time getting snaps in the regular season if Judon keeps this up.

#5: Still No Answers at Reciever for the Patriots

So far, it looks like Jakobi Meyers is the only dependable wide receiver for the Patriots on their depth chart. Sure, the volume hasn’t been fantastic. The rushing offense has absolutely taken the most attention and has been the most effective thus far in the pre-season. But I was really hoping that we would see more from guys like Kendrick Bourne, Nelson Agholor (who made his pre-season debut in Philly), N’Keal Harry (who left in a sling), and camp standout Kristian Wilkerson. Nobody has really stepped up to the plate for the Pats at this spot, and I fear that we may have some inconsistent production similar to last season. Which is detrimental if the tight ends aren’t available or part of the game plan.

There’s still a week to go, and I’m really hoping that Newton and Jones get to display their arm talent a little more and set up guys like Bourne and Agholor to make some big plays. I’m not saying the Patriots have to have production at wide receiver rivaling the Buccaneers. But just more than what we’ve seen two games in.