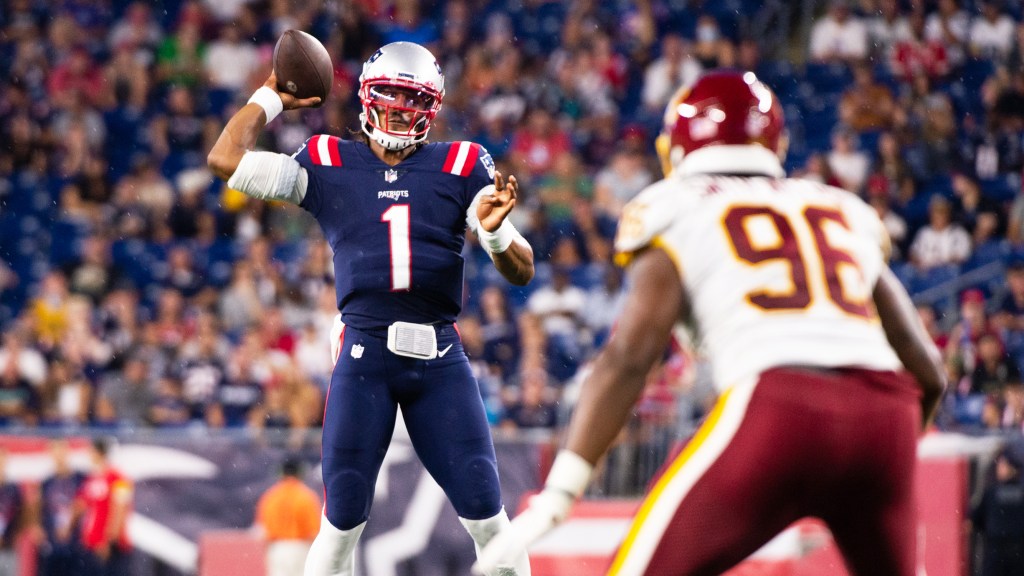 I know we’re all excited about Mac Jones. Trust me, I do. He looked like a young Tom Brady Thursday night against the Washington Football Team. After taking over for Cam Newton who got just two drives, the Patriots’ offense started to click. The first-round pick from Alabama completed 13-19 passes for 87 yards and almost had a touchdown. Unfortunately for the veteran Newton, he got just seven pass attempts and just completed four of them. His highlight of the night was unfortunately a strip-sack by Chase Young on his first possession.

Fans were quick to jump the gun on this quarterback controversy. All over social media fans began to make the casual arguments of “Cam Newton looks the same as last year! Put in Jones!” and are ready to close the book on the second year of SuperCam in Foxboro. If you’ve been following my work this off-season, you know where I lie when it comes to Cam Newton and the Patriots. I want him here so long as Mac Jones is developing and he is the best option at quarterback. Here’s to providing some rationality and hopefully justifying the argument that Newton should be judged on a little more than just seven passes in the first preseason game.

Like we said before, Mac Jones looked excellent in his five possessions. I certainly don’t want to discredit just how impressed I was with the rookie. But are we seriously going to get riled up about Newton missing three of seven passes and the blocking selling them out twice? On his second drive, the offense did move down the field with ease before Jonnu Smith got called for holding. Unfortunately for us who are trying to evaluate, Newton obviously didn’t throw the ball that much. When he did, they were mostly check-downs and screen passes. Short timing routes, though valuable, don’t get to show exactly what Cam Newton has to offer.

Hopefully next week against the Eagles we see more of Newton, and we can fairly assess what he has to offer. Simply put, it would be extremely unfair and hasty to name Mac Jones the starting quarterback based on one preseason outing where his opponent had the opportunity to show virtually nothing and Jones got most of the reps in the entire game.

We Can’t Throw Mac Jones Into the Fire

Make no mistake, Mac Jones coming out of Alabama is by no means a finished product. He isn’t the same caliber quarterback as Trevor Lawrence, Joe Burrow, Justin Herbert, Kyler Murray, and others who can start virtually immediately. McCorkle is going to need some time to grow. Throwing him out there week one without any sort of fire and handing him the starting job would be a disastrous mistake that could ruin his future. Cam Newton has value on that alone. Unless Jones is clear cut the best quarterback and there’s no doubt, Newton should still be on this team. Unless you guys think Brian Hoyer is capable of keeping this team competitive while Jones gets ready to go. I don’t think even the most die-hard Hoyer fans believe that, if they even exist.

The Competition Will Bring Out the Best Quarterback

Make no mistake about it, we don’t want this to be an easy decision for Bill Belichick and Josh McDaniels. If Mac Jones is by far the better quarterback, he doesn’t even have to be great necessarily. That could just mean Cam Newton is that bad. If anything, you’d hope Newton is the best coming out when you look at the two extremes because at least Jones has time to grow and you’re in no rush to thrust him out there. The battle for starting quarterback should by no means end in the preseason. We’ll get a good look at these two signal-callers, but unless Mac Jones is truly the second coming of Tom Brady or Newton simply cannot throw the football anymore, we shouldn’t force it with McCorkle.

We’re just one week into the preseason, and I get that fans are reactionary. That’s what this industry is all about. But let’s just try to keep cool heads about this subject here. Jones will get his time, and when he does he better be prepared for the task at hand. That being said, if he’s even remotely unprepared and Newton is capable of leading this team in 2021, I think the answer is more obvious than it seems.