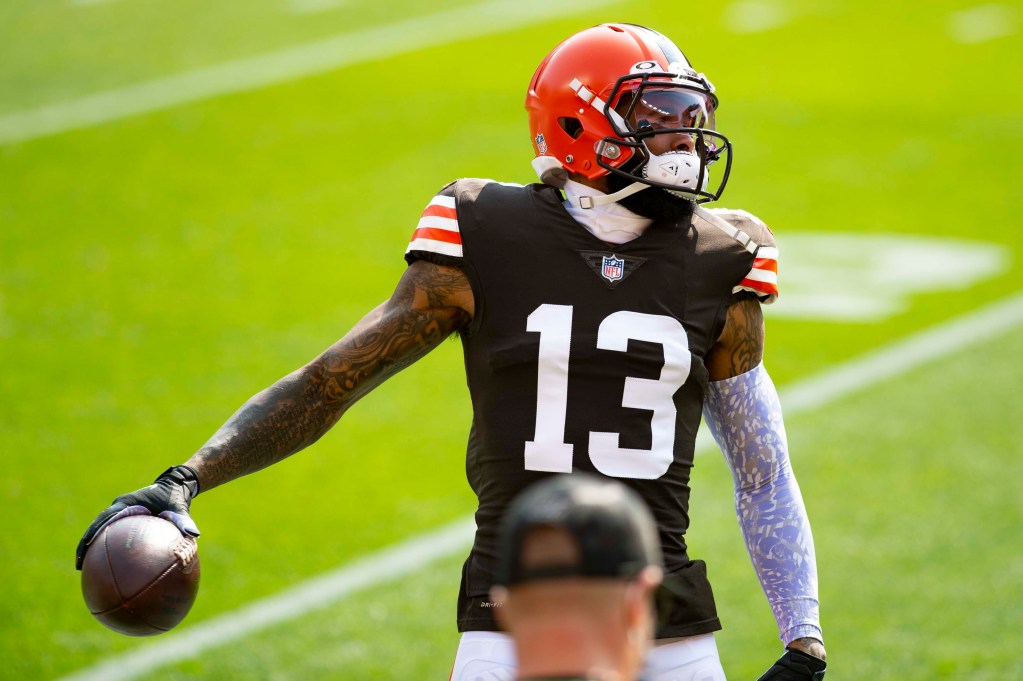 When the story of Odell Beckham Jr. first surfaced nearing the trade deadline, the name Bill Belichick and the New England Patriots immediately began to surface in connection. The immediate reaction was: “Please, not again. We’re tired of this rumor”. As this would not mark the first time a potential link between the Patriots and OBJ has been brought up. Yet, this time around, Beckham is subject to waivers, not a mere trade target to appease Tom Brady.

The situation presents itself a little differently. New England will likely be looking for that one last playmaker to differentiate their 4-4 offense. Making the possibility of this deal actually happening seem a little bit more real. Leading one to imagine, what the offense would look like, how Beckham could function in the offense, what he could add to it, and whether his addition, at likely a restructured salary, would be worth it.

Of course, Beckham is going through the waiver wire, where the Patriots stand middle of the pack at 15th. There are a few teams in front of New England, posing as threats to snatch him off the wire. Most would likely have more money to do so. As the Patriots sit with their estimated $2.5 million in cap space. However, something to anticipate is the mere fact that some of the under .500 teams would have to consider between surrendering draft pick value for a season that seemingly cannot be salvaged, and the value of bringing in Beckham, who could potentially become disgruntled in a losing environment. That is especially if the quarterback situation is less than optimal. Leaving many contenders, looking for that last push over the hump, the most likely candidates for his service.

Many of whom also have limited cap space to absorb Beckham’s large remaining salary of $7.5 million for the nine remaining weeks of the regular season. In fact, according to ESPN’s Adam Schefter, there are only nine teams that can afford to claim Beckham without maneuvering any other money around. Many of those teams have reasonable questions regarding their competitiveness around the league, and or their quarterback situation. Leaving many to question if Beckham will get claimed off waivers at all.

A lot still has to play out, yes. However, one thing to count on, if Beckham does in fact hit the open market, New England will be interested in some form. Beckham will share at least somewhat similar interest. The rest of the story is yet to unfold.

With much speculation and possibility in the air, let’s try to address how he can fit in this offense. What does Beckham bring to the table, and how does he open things up for this offense?

How does Beckham fit?

Adding Beckham gives you at the very least a fourth truly competent receiver to work with. With Jakobi Meyers in the slot, Nelson Agholor at the Z spot, the Patriots fit Beckham in at the X. That’s a receiver trio that Mac Jones should be comfortable with, and most other quarterbacks would agree. Especially with Kendrick Bourne also in the mix. Then, N’Keal Harry seeing some usage, the two tight ends in Jonnu Smith and Hunter Henry, and the rushing threat of Damien Harris. That offense would have a lot of options at their disposal. They would be able to operate from a variety of different looks, and incorporate loads of pre-snap motion in order to create a multiplicity of mismatches on the field. On a consistent basis, they would have the personnel to beat the blitz, tight man coverage, and find empty holes in zone coverage, getting playmakers into space with the football.

Ability to draw favorable matchups from a variety of looks

Beckham would be that true number one receiver that New England is missing, and be the true X receiver they have been searching for. With top three receivers solidified and two top tier tight ends, the passing game could work out of almost any formation.

That includes spreading out the field, and Jones reading out of a three receiver, two tight end set. With defenses focusing on not getting beat deep by Agholor and trying to account for Beckham and his playmaking ability, the defense would still have to account for both Henry and Smith in the passing game, along with either Meyers or Bourne (whoever is in the game) on the shallow route. Leaving those four to get favorable matchups in the passing game, and likely strengthen Jones’ quick passing game ability and options even further.

Not to mention, the third-down conversion rate for this team (currently at 42.86%, good for sixth according to TeamRankings) would go up even further. Allowing them to compete for one of the top chain-moving offenses in football, which would be another way in which they could start to solidify themselves as a playoff threat.

How the run game factors in; defensive stressors

Ideally, with solid offensive line play and Jones continuing to complete passes, avoid the mistakes, that offense plus Beckham makes them a serious AFC threat. Adding in the threat of the run game behind the offensive line still potentially awaiting the return of Trent Brown. Also factoring in the defense that has impressed throughout the season. A unit currently ranking twelfth in the league. Additionally, just won the game against the Los Angeles Chargers. Doing so by holding Justin Hebert to arguably his worst performance of the season.

With the strong rushing attack, and the depth at the skill positions, play action would present problems for opposing defenses. Harris has been routinely rushing for 100 yards a game. So to have Harris or Stevenson as a rushing threat or a receiving threat, along with the two tight ends helping sell run until it’s a pass, would be enough stress on a defense. But also Beckham underneath, Agholor up top. Man, that puts a lot of different stressors on a defense and secondary. Especially when the offensive line can protect the pass.

An underutilized wrinkle to call more: possibility of RPOs

Along those lines, the offense has not been afraid to dabble in the RPO from time to time this season. Offensive playcaller, Josh McDaniels, could also put defenders in a bind. With Alabama boys Jones and Harris, both familiar with similar RPO looks, have another weapon at their disposal. Beckham, who can be a threat on the slant route and with the ball in his hands. That RPO trio off different looks, including two-tight end sets, could be deadly.

Beckham would get his targets, of course. He would likely be a big splash play guy. Play the role as someone who they would get the ball to in space. He’d be someone who could haul in given contested catch scenarios. Along with run those RPOs with on occasion. It would truly depend on how quickly he could get a feel for the offense and the environment.

Regardless of Beckham’s individual statistical contributions, one thing is for sure. His addition to the offense would help in two of the three keys to winning football games (field position, turnovers, and penalties). This team with Beckham would be able to dominate field position on all three units. They’d be able to convert third downs at a high rate. By adding enough talent for defenses to need to respect, defenses get in a matchup bind. Therefore, allowing Jones to likely have his checkdown options and third-down chainmovers (Meyers, Henry, Bourne, potentially Smith) open even more. While for the times in which defenses don’t respect Beckham’s game-changing talent, you then have a big playmaker option in this offense. An offense that has struggled to produce plays of 20 yards or more in the first half of the season.

That offense would have much at their disposal to push them into a Wild Card spot. It would be Wild Card at the very least, assuming this then high-powered team could go on a run to end the season. Given the team is currently the first spot out of the Wild Card, you better bet that Belichick is salivating at the idea of Beckham. The idea of being able to run his offense out of so many different looks and formations would be arousing to almost any head coach. The move would likely stamp his ticket to the team’s first playoff appearance of the Mac Jones/post-Brady era. A milestone that the he’s likely at least somewhat itching to get past. Buckle up folks, things could get interesting.

As when Belichick was asked about mid-season acquisitions today, he responded with this:

And to top things all off for Belichick, this could sweeten the deal even more, given Beckham clears waivers:

Again, we’ve been looking at photos of Beckham cropped into a New England jersey for years. However, this time around, buckle up folks. It might just be that time a camera truly captures Beckham wearing the blue, red, and grey. Don’t buy the jerseys yet and monitor the weekend rumors distantly from the couch. Just keep in mind, if no team were to claim him Monday night, the Patriots will almost definitely swoop in hawkishly toward this missing puzzle piece to their offense. Making another aggressive push, just like the spending-spree bonanza they had this off-season.